For the Building Up of the Body 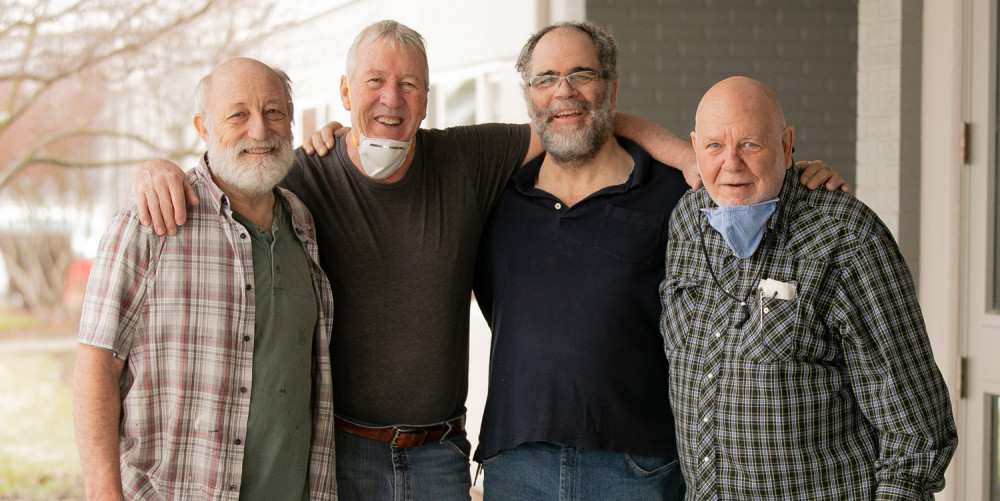 The Lord is in the business of making a people for himself, who enjoy Him and each other.

Part of our life together, and one of the great blessings we share, is a wonderful church building and piece of property. Many opportunities exist to share in life together while showing stewardship over the church facilities that the Lord has entrusted to us.

Willie Gallion has been the head of facilities since the Faith Bible Church building opened in 1997. For the past 12 years or so, three brothers in Christ have helped him care for and transform our facility, making it more useful for specific ministries. Those men are Dan Cammack, Craig Keevy, and Dave Miller.

Dan retired in 2009, and he felt the Lord leading him to help Willie complete projects around the church. Craig and Willie were in a Bible study together at Faith back in 1994, with Dan joining a few years later, so it is special to see the relationship and partnership that formed. Dave Miller, the father-in-law of Dan’s son, has also become a part of many projects these men have done.

“You know you were doing something that would help the church be a better, more useful place. There’s satisfaction in that. God blesses the work.” - Dan Cammack

From building a stage in both the Nepali room and the room used for youth and college ministry to putting in 26 new windowsills in the same wing, these men have stayed busy. “Probably almost every room in this building has something that we — either I alone or together — have done,” Dan says.

Willie comments on how valuable the help of these three men has been on a variety of jobs, even small ones like putting up the awnings in the courtyard during the winter months. Dan has helped set those up and take them down, year after year.

Those who have been around Faith for a while may remember room 120, which is now a handful of rooms that include Tribe Coffee and Books and the Faith Biblical Counseling Center. Willie remembers Craig’s role in transforming the space, a prelude of greater things to come: “We contracted him, and he put a beam and a curtain in. A few years later, we took the curtain out, put a solid wall in, and built the first counseling room.”

In order to create these new rooms, the library had to be moved. “Daniel helped me move the library at least twice,” Willie recalls.

Dan, Craig, and Dave have helped with many other jobs. For example:

The list goes on and on. In fact, Dan says he has a list that is four pages, single-spaced, of projects they have completed since he started serving in 2009.

While no act of service is insignificant, some of these men’s biggest are projects that have enhanced ministry opportunities. Two examples are the completion of the seminary room and the counseling center.

Willie recalls how all three men helped with the former: “The three of them were instrumental in getting the seminary room up and running. That one was huge.” Now, men aspiring to full-time pastoral ministry can receive a degree from The Master’s Seminary right here at Faith.

Additionally, the creation of the counseling center involved transforming the former library into a place where multiple counseling sessions could take place at once. Willie, Dan, Craig, and Dave all helped build it in 2017. They built credenzas and bookshelves, plus walls for separate counseling rooms. It took about three to four months of labor, with some breaks in between.

Willie adds, “We’re building guys. We’re constructing guys. We put things up. We rebuild. But it’s all kingdom work because it is facilitating the ministry.”

Put gifts to good use

What is it that motivates these men to be so helpful? So many of these jobs involve difficult labor. Dan says, “You know you were doing something that would help the church be a better, more useful place. There’s satisfaction in that. God blesses the work.”

Craig, who had his own construction company, has appreciated the opportunity “to be around God’s men” as they have worked on these various projects. He loves the opportunity not only to use his skill and gifting, but the great fellowship and accountability that takes place when he works with these men. He says it can be humbling and challenging, but that God has used the projects over the years to teach him about humility and teamwork.

Dan spoke of the cabinetry project that he and Craig completed. It took 500 hours of work: 250 hours per person. Imagine if there were more than two men working on it. The time and energy these men have invested is a blessing to our church body and should serve as an encouragement for all of us to use the gifts God has given us to bless others.

Craftsmanship is not always a must, but so many of us have the ability to learn and bless the body with our hands. Sinks can be cleaned and stainless steel polished for the glory of God. Wonderful relationships can be formed, and work that many of us never think about gets done, facilitating and enhancing the ministry.

If you are gifted with craftsmanship and practical service and you want to use those gifts for the building up of the body, Willie would love to talk to you. Opportunities are abundant! From vacuuming to groundskeeping to interior improvements, there is always something to be done at Faith Bible Church. Josh has an English degree and loves serving in ministry at Faith. He and his wife, Pam, have three teenage children.