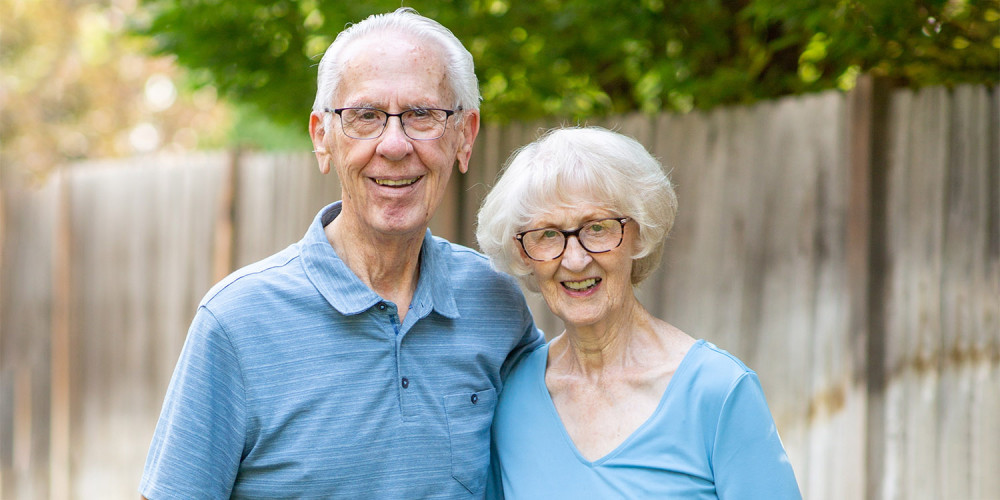 Jim and Helen Campbell have been at Faith since the very beginning and have never stopped serving. Photography by Julie Thiry.

For the past 30 years, God has been faithful to the members of Faith Bible Church. Jim and Helen Campbell have been at Faith since the very beginning and have witnessed God’s faithfulness in action. They encourage our congregation, by word and example, never to separate from the life and ministries of the local church.

God’s provision in the early years

When Faith began, Jim was the chairman of the elder board and Helen was serving over the Women’s Ministry. She was also involved with the choir and music, which has always been an important part of her life.

Even though the school board initially denied their requests, Jim says, God still made a way for the church to use first Lewis and Clark High School (in 1992) and then North Central High School (in 1994) as meeting places. The Lord opened the door to buy Faith’s current property for a reasonable price when nobody else even knew it was for sale. “It was miraculous,” Jim says.

At Pastor Chris Mueller’s request, Jim and Helen also developed and taught a biblically based parenting class to help young parents bombarded by worldly ideas. Several couples with young children worked alongside the Campbells in that ministry, and the parents at Faith were eager to learn. Jim and Helen continued teaching the class for about five years, and they believe the church still offers excellent classes for parents.

Raising up and sending our best

It is encouraging to Jim and Helen that Faith raises up young men and provides them with some years to serve and get a taste of full-time ministry. After those years, those who are called are referred to seminary for further training. Jim says, “This should be the model everywhere.”

Personally, Jim and Helen’s prayer has always been that their children would put Jesus first, always asking God for wisdom on how to train them in the Lord. Although their children were grown when the church began, the Campbells’ grandchildren grew up at Faith. They were taught well in Children’s Ministry, and by college they were involved and serving.

“Discipleship has always been emphasized (at Faith), and people get right into it,” says Helen.

Faith is also a sending church, and Jim and Helen know personally what it means to send: Many of their family members have been sent into ministry across the country and the world. The Campbells have three children, nine grandchildren, and 20 great-grandchildren. Their oldest son, Stan, teaches music at Multnomah University in Portland and has been a worship pastor in various churches. Their son Phil and his wife Denise have been missionaries in Asia since 1984, and their daughter Pam and her husband Walt Takisaki have been faithfully serving here at Faith for many years.

Faith has now sent two of their grandchildren’s families to pastor churches: Sarah and her husband Jerod Gilcher in Arlington, Texas; and Laura and her husband Corey Millican in Shingle Springs, California. Their grandson Matt also pastors a church in Oregon.

Jim and Helen thank God for His faithfulness to their family and, though it is bittersweet to have them far away, it is a joy for them to see their children and grandchildren faithfully serving the Lord. They give God all the glory.

“We are truly thankful because it’s not us, it’s the Lord,” Helen says.

Jim also encourages those at Faith to keep in touch with our missionaries, who are faithful to report to us about their ministries. It is also an encouragement to Jim and Helen that the children at Faith hear about our missionaries.

“When they’re away from home, they’d love to hear from you,” Jim says. He adds with a chuckle, “I’d write them, but they’d never be able to read it.”

Though Jim and Helen admit it might be easier for naturally sociable people like Helen than for introverts like Jim to reach out, neither of them is giving up. It may be harder to do things, but they show that being retired doesn’t mean you’re done serving in the church. Jim still co-leads a Growth Group.

“God gives us opportunities for ministry, and you need to be ready, willing to serve, and jump in!”
—Helen Campbell

“There’s nothing in the Bible that says that you quit at a certain age,” Helen says.

The Campbells encourage retirees to reach out, to get to know people and to serve, and not just slip in as Sunday service is starting and leave quickly when it’s over. Before you know it, “You’ll be thinking, how did we ever have time to work?” Helen says.

“We’re all in this together and there shouldn’t be a separation (because of age),” Jim adds.

Helen is a wonderful example of applying Titus 2, where Paul instructs older women to help teach younger women. Ever since she became a believer as a girl through Child Evangelism Fellowship, Helen has had women to look up to. In high school, she began teaching in Child Evangelism Fellowship with an older woman, Mrs. Sorenson, at her church. That’s where Helen developed her love for teaching the Bible to children.

“My whole life I’ve had an older mentor… God has put so many women in my life, until now, there’s nobody older than I am,” Helen chuckles.

God has given her many opportunities to engage with younger women, which she values greatly. She has been serving in MomLife and has a passion for encouraging moms and kids. She has counseled young moms and has done cooking classes and other activities with women. However, the most important thing to her is to pass down a love for God’s Word through reading and memorization.

“We’re all in this together and there shouldn’t be a separation (because of age).”
—Jim Campbell

We have a lot of opportunities at Faith to bring people to church or events. Helen has used the Women’s Christmas Dessert as an opportunity for sharing the Gospel. One year after she brought some neighbors to the Christmas dessert, one of them asked Helen if they could do a Bible study. Helen wasn’t about to pass this up. She assumed that just the women were interested, but to her surprise their husbands joined. Together she and Jim led a study through The Stranger on the Road to Emmaus. “That was a great thing,” Helen says.

Jim and Helen recently moved, but because of this study and other outreach efforts they made over the years, they continue to stay in touch with their former neighbors.

As the church turns 30, the Campbells trust God’s continued faithfulness for the years ahead. Jim feels that the current elders and leadership are a solid, faithful group of men. “It’s a day by day, week by week time of staying faithful to God and not just depending on structure,” Jim says.

Helen adds, “I do believe our elders are very careful men to lead the church biblically, and we must stay that course.”

Jim and Helen are a blessing to many here at Faith. Giving God all the glory, they lead by example, making the most of every opportunity the Lord gives them.

“God gives us opportunities for ministry, and you need to be ready, willing to serve, and jump in!” Helen says with a smile.

Watch an interview with the Campbells at fbchurch.org/30 to hear more of their story and the history of Faith Bible Church.

Katie writes for a digital marketing agency. She grew up at Faith Bible Church and serves as a writer for Faith Weekly.