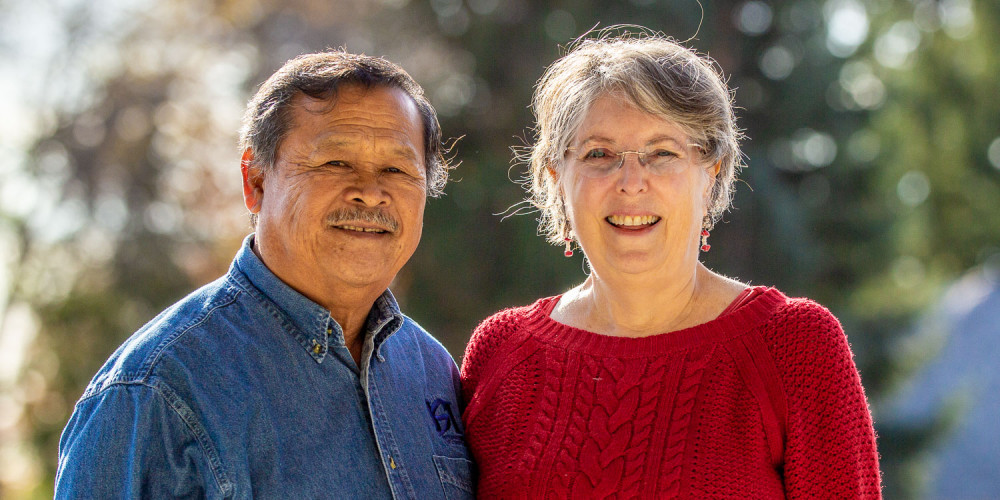 In Acts 2, thousands of people of many languages came to Jerusalem for Pentecost and heard Peter’s proclamation of the gospel. Many of the 3,000 who were saved that day presumably returned to their homes across the region carrying the good news.

Dan and Pam Ubaldo see the same opportunity to make Jesus known to the nations—right here. They lead Spokane’s outreach for International Students Inc, a national network ministering to people who come to the United States for educational opportunities. As Faith Bible Church outreach partners, their mission field is close, but their strategic impact reaches around the world.

ISI ministries include Talk Time, a monthly program that brings Christian volunteers to have conversations with international students so they can practice English and learn about American culture. They also offer an ISI-designed Bible study called M28—from Matthew 28, where the Great Commission is found—that helps teach unbelievers and new believers who are learning English. A monthly group called International Women’s Connection specifically ministers to women.

Dan and Pam can share story after story of the surprising impact of their ministry not only on the students but on their families and others at home.

One example at Faith is the Nepali-speaking church, which is not affiliated with ISI, but also wouldn’t be here without them. In 2008, the World Relief director asked if Dan had any Nepali students in ISI. “It just so happened, I had one. She [the director] said, ‘I need to meet her!’” World Relief asked for help with translation when the very first refugees arrived in the U.S. from Bhutan.

The Ubaldos and the student met that family at the airport. Their English was actually good, but that connection began a lasting friendship. For several years Dan was heavily involved in bringing more and more Nepalis to church as they arrived in Spokane and needed friends. Dan had to pull back as the refugee ministry became more demanding, but it continues today. If God hadn’t given ISI one Nepali student, that relationship may never have started.

“We didn’t plan on planting the church, but God did.” Pam Ubaldo

Prepared to reach the nations

The Ubaldos signed on with ISI in 2006, but God prepared them for many years with a heart for international students. Dan’s 24-year career in the Air Force moved them around the world, and in each place they found themselves sharing hospitality with internationals.

Pam first got involved in Talk Time around 2003, when it was led by Fourth Memorial Church and not yet affiliated with ISI. Someone from ISI reached out to the group as health problems forced the Fourth leaders to step back. Visiting an ISI conference and another student group near the University of Washington, Pam and Dan were both convinced of God’s calling for them to reach international students.

“Dan has been a pastor in the Philippines, we’ve talked about ministry together, we’ve lived in different places in the world, he’s already an international himself, and I said, this is like a custom fit,” Pam says.

The Ubaldos say outreach to international students is an excellent cross-cultural training ground for people considering missions or tentmaker ministries in other countries. ISI offers training for all their volunteers.

Pam remembers Andrea, a volunteer who helped her prepare food for Talk Time. One evening as more and more students arrived, they were concerned the food would run out. “We’d just got done praying that God would multiply the loaves and fishes when a brand-new volunteer walked in with a casserole dish and a dessert.”

Andrea is now in missions in Africa and tells Pam she’s never forgotten seeing God’s provision for every need at ISI.

“We’d just got done praying that God would multiply the loaves and fishes when a brand-new volunteer walked in with a casserole dish and a dessert.” Pam Ubaldo

Students who come to the U.S. want to talk to Americans and learn about their beliefs and practices. That’s an opportunity to offer something we all already have, Pam says. “People say, ‘How can I minister?’ They’re here to learn English, to learn our culture. You’re the expert.”

Volunteers are encouraged to pray for a connection with a student or group to build a friendship beyond Talk Time. That’s where conversations can go deeper. Dan gives one example: “I was taking a Saudi guy home one evening, and his question was, ‘Dan, why are you doing this?’” It was an invitation to talk about Jesus.

Students often come from families of means, and their education means they are likely to hold positions of influence when they return. There are ISI-trained Christians, for example, in high places in the Chinese government. The Ubaldos have heard stories in which even those who are not believers remember the kind treatment they received from Christians in ISI, and they help the gospel go forward in their countries.

One Chinese student became a Christian right before coming to Spokane and was connected with Dan because he was asking for a Bible study. They organized a baby shower when his pregnant wife joined him in Spokane. Right before she returned home, she professed faith in Christ. Over the years, that family has shared the gospel with their relatives in Asia as well as other Chinese people in the U.S.

Full-circle stories like that help the Ubaldos keep planting and watering seeds. One woman came from a closed Middle Eastern country “really seeking to know God,” Pam says. She met with Pam one-on-one to study the Bible and shared everything she learned with others. Still, she had not professed faith in Jesus when she returned home. She also couldn’t continue studying with them online in fear for her safety.

But through another friend at Faith, she connected with an American Christian couple living in her country. Last December, in a video call from the relative safety of a car in a mall parking lot, she told the Ubaldos she had put her faith in Christ. A few months later, she sent them a coded message letting them know she had been baptized.

Most international students returned home with the onset of the pandemic in spring 2020. Since then, none of the ISI ministries have met like they used to.

Talk Time is suspended. Dan led an M28 group online last year. A handful of international graduates live in a home owned by a volunteer, and this school year a few more students have returned to Spokane. The group now hosts Wednesday night international suppers.

Because of the uncertainty of when the ministries will fully reopen, Dan and Pam aren’t asking for active volunteers right now. They don’t want to overwhelm the small group of students they have. But they do want volunteers trained and available, because “you never know” when the opportunities will open up. They want to train college students so they can reach out effectively on their campuses.

If you have a heart for the nations, email us at info@fbchurch.org to be put in contact with Dan Ubaldo to receive updates about available training and ministry opportunities. To partner with the Ubaldos financially, go to internationalstudents.org/team/ubaldos.

Lynn and her husband lead a Growth Group. Lynn serves as a writer and editor for Faith Weekly and also writes for UGM.