How Can It Be? Author’s note: While we have no quotes from Joseph in the Bible, his experience was remarkable. The following is based on events described in Scripture, but it is only my personal perspective of what he may have been thinking.

My name is Joseph. A regular guy with an incomprehensible assignment. You might not believe my story, but you need to hear it.

She was and is beautiful. I noticed her in the marketplace. I don’t know if you believe in love at first sight, but it was as close to it as you can imagine. I am almost 20 years old; she is a few years younger. Little did I know what was awaiting us together.

I have been learning to be a carpenter; well, more of a stone mason since there aren’t a lot of trees around here, but there are a lot of rocks. I am a member of the tribe of Judah with a direct line back to King David, which is humbling and amazing. I spend a lot of time in the synagogue learning about the Law and appreciating my heritage.

My relationship to Mary grew and plans were made to get married. You need to understand the process to grasp the profound events which happened.

There are three steps for marriage in my culture. First the betrothal, which made us legally married, but we didn’t live together or consummate the marriage. Then there is the period of preparation, which can take up to a year getting ready for the third step, the wedding feast, which often goes on for seven days! It is quite the labor of love to prepare the food and make the garments to be ready for the party. And I needed to sharpen my skills as a carpenter and make a house for us to live in. When all is ready, the man goes to his bride, takes her as his own in a great procession, and then the feast begins with a lot of celebrating and food!

Our betrothal was a joyous, thrilling day, and waiting until the feast to be with Mary was the hardest part of all. But all was going well with the preparation until one day Mary and I had a conversation that shook me to my core.

Mary told me she was visited by an angel who told her she would give birth to a son, but without being with a man. I listened, but my head was spinning. I wanted to believe her, but how could this be?

The reality of her pregnancy became evident, and I had to make a choice. The Law said I could bring formal charges against her because she had broken her vows and had been with another man. That would result in a public divorce and stoning to death. There’s no way I was going to do that to Mary. I loved her too much to even consider that.

There was another option. I could divorce her privately to end the marriage and each of us go our own way. Her life would be spared, as well as the baby’s. That’s what I decided to do, but it didn’t make the trauma any less. I had many sleepless nights. But one night, it all changed.

Mary had been visited by an angel, and now it was my turn. In a dream, an angel appeared to me and said,

“Joseph, son of David, do not fear to take Mary as your wife, for that which is conceived in her is from the Holy Spirit. She will bear a son, and you shall call his name Jesus, for he will save his people from their sins.”
-Matthew 1:20-21

You might wonder if it was just wishful thinking on my part. Oh no, the angel was real. I know the difference between a “human” dream and an angelic one! But did I really hear it right? I knew the Law and the prophecies about the coming of the Messiah and about a virgin giving birth to a son. But could it really be that Mary and I were the ones selected to be participants in the fulfillment of this long-awaited promise?

It certainly was amazing news, and I could hardly wait to tell Mary! No divorce, no saying good-bye to each other. We were going to be husband and wife.

When I told her, she was elated! She knew I believed her now, but with that joy came a change of plans. I took her home right away as my wife, and there will be no feast. The townspeople still look at us with great disdain because they saw Mary pregnant. They assume one or both of us were disobedient, and so our marriage has a cloud over it – not to mention the baby’s reputation.

But life went on. It was census time, and so we went to Bethlehem to be counted. It was a tough journey with Mary so far along in her pregnancy, but we had no choice.

The city was crowded with many other people who were there for the same reason, and I couldn’t find anywhere to spend the night, at least not anywhere safe. I was nearly in a panic until I found a cattle stall that would at least give us some shelter and privacy. It was not ideal, not very comfortable, and smelly. But it was shelter, so we settled in as well as we could.

Mary called out to me. “Joseph, it’s time!” I rushed to her as she moaned with pain. I wasn’t exactly sure what to do, but there was no midwife, so it was up to me to help.

And then it happened. A baby boy arrived, crying as he came into his new home, and we marveled. Another piece fell into place from the prophets: The Messiah was to be from Bethlehem. Can it really be?

Oh, and we had company. I guess it was appropriate since we were in a livestock stall that scruffy shepherds came running in. They excitedly told us about angels singing, lighting up the sky, telling them of the newborn King. They just had to come see for themselves! I had to pinch myself; it really is true!

So now, here we are. We are thinking about all that the angels and the shepherds told us, still trying to absorb it. Full of awe and wonder, my mind and heart are filled to overflowing.

As I hold Jesus now, I am joyful and a bit frightened, but I trust God. I know He is in control, and I can’t help but sing.

How could it be?
-Excerpts from "Joseph’s Song" by Michael Card 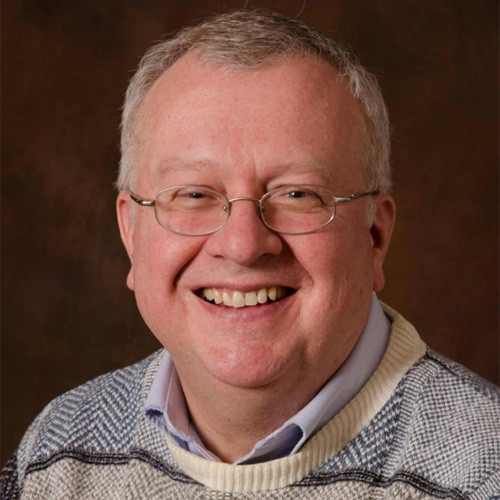 Chris is a graduate of Trinity Evangelical Divinity School, Deerfield, IL (M.Div.) and has served as a pastor in churches in the Midwest. Chris and his wife Marty have been married for over 37 years. Chris currently teaches the Fundamentals of the Faith class and serves in the Prayer Ministry here at Faith Bible Church.