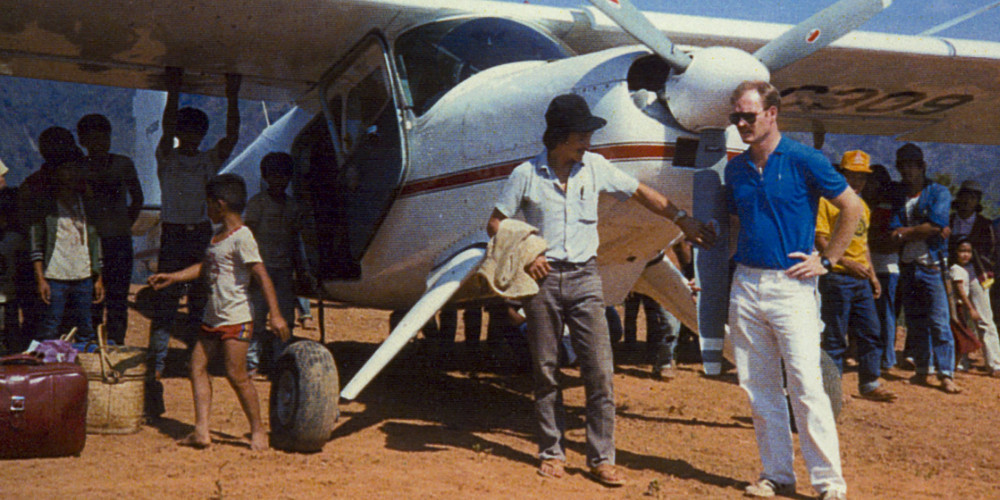 What do you do when you are in a trial? Do you pray to God, but answers don’t come? Does God seem distant and you feel alone? Do verses like; “For my thoughts are not your thoughts, neither are your ways my ways, declares the Lord.” (Isaiah 55:8) or “The heart of man plans his way, but the Lord establishes his steps.”(Proverbs 16:9) bring comfort or cause conflict deep within? Do you trust that God is good even in your suffering?

Martin and Gracia Burnham served as missionaries in the Philippines. When their plans came face-to-face with God’s will, it led to the most challenging, soul-revealing year of their lives where they wrestled with questions like these.

Martin served as a jungle pilot to neighboring islands. Gracia managed the radio communication between their base and the missionaries they served. She also homeschooled their three children. When Martin went to fill in on a nearby island, Gracia went along to help him because she knew it would be a hard and demanding week. This trip coincided with their anniversary, so she planned a romantic weekend getaway to celebrate.

Early on May 27, 2001, Gracia and Martin woke abruptly to banging on their door. Supposing it was a drunken guard, they ignored it. Suddenly three men carrying M16s burst into their room demanding that they come with them. Guns pointing at them, they got in a boat with eighteen other hostages. This began their term as hostages of the terrorist group, Abu Sayyaf, who had ties to Osama Bin Laden. Their abduction challenged what they believed about God and it strengthened their faith as they saw signs of God’s sovereign, loving control despite their terrifying situation.

They were constantly on the move through the Philippine jungles. Conditions were unimaginable. Food was scarce, hunger and thirst were constant companions. Bathrooms were nonexistent, so were toilet paper and privacy. Fearing his escape, they handcuffed Martin around trees, making sleep nearly impossible. Remarkably they allowed Gracia to sleep near him, this was another sign of God’s love and protection because they were forcing other women to “marry” their kidnappers. Although the conditions were horrific, Martin and Gracia, sought to love and serve their enemies by sharing with them from occasional care-packages that found their way to them in the jungle.

Money to fund their militant agenda was the reason behind the kidnappings. Ransoms paid for some hostages bought their release. They beheaded three captives. Everyone felt extreme pressure to convert to Islam, some did. But Martin and Gracia never abandoned their belief in God even under cruel and frightening conditions. Instead, they engaged in conversations with the Abu Sayyaf about Islamic beliefs and practices seeking opportunities to share their faith and the gospel with them.

They would talk about their children and family members, concerned for them. When birthdays or holidays came around, they missed them, especially not knowing if they would ever see them again. Their daily task became staying alive. But as days became weeks and weeks became months, Gracia’s hope waned. Martin was constantly encouraging her to hang on insisting they had to make it home to their children. Daily they prayed together. Remembering familiar scripture gave them strength as did singing hymns, sometimes the other hostages joined in. Martin said, “Maybe God has us here just to praise Him in this dark place.”1

God uses trials and difficulties to test our character, and for Gracia, it revealed sins like jealousy, covetousness, hatred, and doubt. She said, “...when everything is stripped away from you and you have nothing, you find out what you really are like down deep inside. What I was starting to see was not pretty.”2

On June 7, 2002—one year and eleven days after their kidnapping, only three of them remained prisoners. Trying to free them, the Philippine Army engaged in a gunfight with the Abu Sayyaf killing Martin and the other hostage and wounding Gracia. She was finally free, but the man she loved more than anyone else was dead...she would be returning home alone.

People expected Gracia to be bitter, she wasn’t. Some thought she might hate the men who destroyed her family, but she forgave her captors. Because Gracia held tightly to her faith in God, believing His Word, she emerged from the crucible grateful for God’s love tangibly seen in the support and prayer they received. She remembered we are all called to suffer as Christ did. Speaking at a press conference after returning home, Gracia said, “A very bad thing happened to Martin and me when we were taken, hostage. But we want everyone to know that God was good to us every single day of our captivity.”3

Later, while reflecting on 1 Peter 1:6-7 “In this you rejoice, though now for a little while, if necessary, you are being grieved by various trials, so that the tested genuineness of your faith-more precious than gold that perishes though tested by fire- may be found to result in praise and glory and honor at the revelation of Jesus Christ.” She thought, “Well. That’s just what has happened to me. My faith has been tested, and I’m more sure of what I believe now than ever before. God has given me joy and peace in the midst of trials.”4

Has God allowed circumstances in your life to test you, but deep inside you are questioning His love, allowing bitterness to take root? Has someone severely wounded you and forgiving them is inconceivable? I would encourage you to cling to God in His word, holding fast to His promises and unchanging character. Start looking for Him in the dark places, then praise Him for the way He answers you. Fill your mind with truth, allowing it to be your source and guide, not your feelings. Ask God to reveal your sin, and then repent of it. No matter where this finds you today, find encouragement in God’s steadfast love for you. He might lead you where you do not want to go but know that He is going with you.

Trudy and her husband Johntom have four grown children and an ever-growing number of grandchildren! Trudy oversees the Women's Ministry at Faith Bible Church.